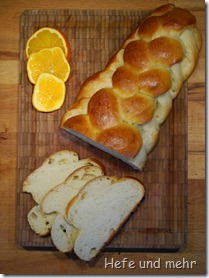 Zorra post here about a bread flavoured with amaretto.  What a nice idea, but I do not have amaretto in my pantry but homemade orange liquor. First I thought about baking brioche with it but then I decided to make a leaner recipe. So I make some small changes in this Challah recipe. I reduced the amount of oil a little bit and added liquor to the formula. And because I had not so much orange liquor left I added also some orange flavoured oil. The resulting bread has a fine orange taste, but its a mild flavour, so even my boyfriend like it. If I would bake it just for myself, I would prefer a stronger orange taste. END_OF_DOCUMENT_TOKEN_TO_BE_REPLACED