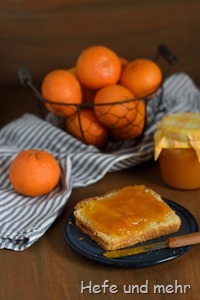 This is already the third batch of this orange marmalade I cooked in the last month. Partly because the marmalade is so delicious and partly because I tweaked every batch a bit more until I reached a state of perfection (at least for me). The idea of cooking and then pureeing whole oranges I took form Christine Ferbers “Jam bible”. And already the first batch made after her recipe was great. But the bitterness was a bit to strong for me and so I started to tweak. I changed the time for cooking and the ratio of juice and whole fruits.

And I tested different kinds of oranges. My favourite is the Canoneta, but every juice orange is a good choose as the mesocarp (the white thing between rind and fruit) is thinner and so the marmalade is less bitter. But if you can get tangrin I can only highly recommend to add some to the mixture, too. They add a deepness of flavour that is incomparable.

And so the third batch is now a big candidate for the title “Favourite Jam of 2017” and in combination with freshly baked brioche it can replace every cake for me.