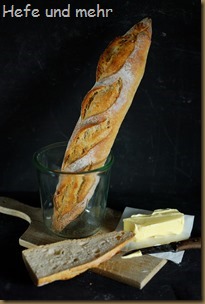 This Weekend I planed to bake the Baguettes which Sara posted on her Blog. But when I mixed the poolish I ran out of white flour. It was already late evening, it was cold and raining and I did not want to leave home again to run to the supermarket. Instead I checked what was left: rye flour was no alternative, but white spelt flour and a darker wheat flour was looking very good.  And because the planed recipe was now out of discussion I mixed a bigger batch sourdough with the darker wheat flour and made an autolysis dough with the spelt flour.

The next morning I kneaded the dough by hand and let it rise for the hours at room temperature with some folds in between. Then we left home to buy and plant some apple trees with my spouses parents. When we came home late afternoon I heated the oven and formed the dough to baguettes. When I pulled the loaves from the oven they smelled divined. So we ate one while still warm. And it tasted as good as it smelled. Crunchy crust, middle open crumb and a deep, complex flavour due to the two preferments and the cold fermentation. A unplanned bread which turned into a favourite!