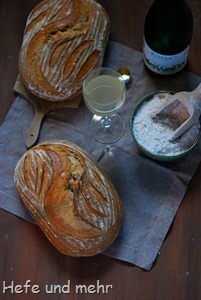 Two years ago I had the idea to bake a bread which is only leavened by the yeast of a young wine (Federweißer). That worked good and was delicious, as you can see at this great breads of others bloggers. When I planned what to bake for the goodby party of my favourite ex-colleague (it is a double ex as we both have left now) there was again a flask of Federweißer sitting on the counter. The dearest was not around to rescue his beloved wine from misuse and so a not negligible amount of it was used to make a rye poolish.  To give the bread a hearty flavour, I prepared a sourdough as well.

The bread developed a good flavour with a slight sweet note from the young wine. The crumb was soft and the crust was crunchy. I hope, that you believe me that, as I can not provide a crumb shot because the bread was a present which I could not cut in advanced, of course.