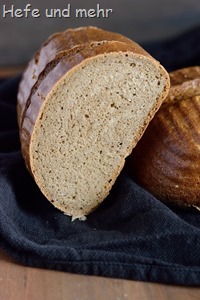 The “Oberländer” Bread is a bread with tradition and stormy history: In 1829 the city council of cologne fixed the price for bread. The Bakers did not agree and so the bakers strike started. To get bread for the city, the council ordered bread in the region upriver, the so called “Oberland”. As this region has poor soil, the bread is baked with lots of rye there. This yields a bread with long shelf life and so it could be easily transported down the rhine to cologne. The cologne inhabitants liked the bread very much and even after the strike was ended they insisted on getting their beloved “Oberländer”. And so this bread is baked in cologne until today.

The characteristic shine of the crust is due to a glaze made of starch and water. Another characteristic trait of this bread are the tree slashes across the loaf. It is a mild rye bread with a fine crumb and a long shelf life. It pairs well with both hearty and sweet. And so it is both a beautiful bread for the regionalen Bread series and a good gift for someone who just moved to cologne.