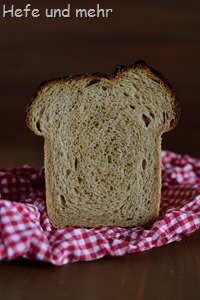 The “Bergische Land” is a hilly region next to cologne. Its name stems from the former Duchy of Berg and not from the hilly (which means “bergig” in German) landscape. It was for a long time a poor region as the ground is stony and loamy. Most farmers grew rye which can better cope such conditions.

And if you look for recipes which are from this regions you will inevitable find mainly rye breads. But for special occasions a whet bread was baked. It is called Nullbruut.

The origin of this bread stems either from the flour or because of its form. The Rheinische Wörterbuch explains that “dubbel genullt” means a flour is extra finely milled and  such is the flour need for this bread. But “null” is also an old word for “parting (hair or landscape)” and could refer to the fact that the bread is slashed lengthwise prior to baking.