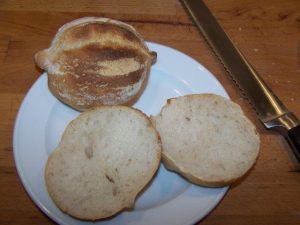 The Ceriola I baked last week were very good. A nice crispy crust and a airy crump, looking as nice as rolls from the bakery. The best rolls I ever bake!

But one single person testing the rolls declared, that the rolls are fine, but the rolls from the bakery are more fluffy. Ok, that arouse my ambition. The recipe itself was fine, I was sure about this. But maybe the methode was wrong? I recalled a post Steve from Bread cetera published some weeks ago. In the Post “More Musings on Mixing” he showed an intressing technique to prepare dough.

Like him, I used the whisking attachment to mix the batter consisting of the sourdough, the yeast, all of the water and a little amount of flour, untill the mixture becomed aerated. Now I changed to the dough hook to mix shortly the rest of the flour with batter. After a resting periode for autolysis, the dough was kneaded untill the gluten developed. That happend really fast, one minute after kneading the dough started to become smooth and after another four minutes the gluten was well developed.

I formed and proofed the rolls like the last time. Because in my oven is just room for nine rolls ad once when I use my baking stone, I put the rest of the rolls in the fridge so they had the same nice ovenspring as the first batch.

When cooling after baking the crust make some nice cracking sounds. And the crust was as crispy as the cracking sounds promise and the crump was much more fluffy then my first batch I baked last week. As fluffy as a roll from the bakery, but without improving chemistry 😀

Use the whisking attachment to mix the batter consisting of the sourdough, the yeast, all of the water and 150g flour, untill the mixture becomed aerated. Now chang to the dough hook to mix shortly the rest of the flour with batter. After a resting periode of 30 min for autolysis, knead the dough for 5 min untill the gluten developed.

Rest for 30 min at a warm place. Put the dough at your working surface and weigh pieces of ca 75g – 80g. Form to a ball. Now use the edge of your hand to press in the middle of the bowl. Fold it together and roll the ends, giving the roll two pointed Ends.Let rise with the seamside down for 60 min. Preheat the oven with the bakingstone at 250°C during this time.

After rising, turn the rolls, so the side on which they were lying during rising is now the upper part. Bake the rolls on the hot stone with steam for 25 min.