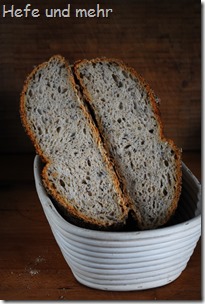 Cinzia from Cindystar asked us to bake Bread with seeds and flakes for Bread Baking Day. When my mum asked me for a recipe for “Weltmeister-Brot” (Champions Bread) I knew directly that this would be perfect for this theme.

It is not clear, why this bread is called champions bread. Some Bakers from the german island Sylt claim that they invented it, while others connect it with the swabian soccer player Klinsmann, who is a baker by trade. I can only tell you, that I ate both champions bread and rolls first as a child in the 90th during our family holiday in East Frisia.

I saw the champions bread either baked in a tin or formed as a batard, but I like the batard more. But the recipe would work in a tin, too.

I like the bread very much, with its light and soft crumb and a thick, crunchy crust covered with a lot of seeds. That’s a bread I like!