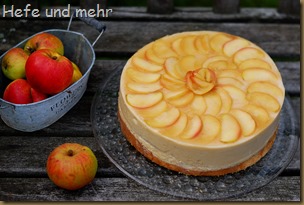 Celebrating my birthday always means for me baking a cake I like very much, too! And something I like very much are cakes baked with the heritage apple “Jakob Lebel” which grows in my parents garden. For me this is the ideal apple for baking cakes or making apple juice. And so I decided that my birthday cake will be apple torte. But I did not use the windfall apples but the last glasses of apple sauce, apple juice and apple slices I preserved last year, so I make room for new, too!

The torte consists of a thin cinnamon cream layer, topped with a apple slices in apple juice jelly (made with agar) and covered with an apple mousse. On top of the cake there are fanned apple slices  and a little rose formed with apple slices, which looks beautiful. To prevent stress on my birthday I prepared most of the cake the night before, so I only had to do the rose and fanned apple the next morning. That worked very well and we had a beautiful day in my parents garden, where I took the pictures of the cake together with windfall apples, too. 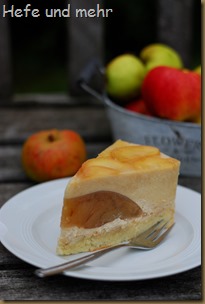 For the golden chiffon: Mix egg yolk, oil, water, sugar and spices until well combined, the sift flour and baking powder on the batter and fold it into the batter.  Whip egg white with sugar until it forms soft peaks, then fold it into the batter, too. Bake in a spring form (Diameter 26 cm) and bake at 175°C for 20 min. Let cool down and place the cake in a cake ring.

For the apple filling cook apple juice and agar 2 min. Place the cooked apple slices in a bowl with 20 cm diameter and add the apple juice. Place in the fridge until the agar solidified (about 1 hour)

Cinnamon cream: Melt the chocolate and whip the cream. Mix milk with the cinnamon and agar. Cook for 2 min.  Fill in a cold bowl and stir in the molten chocolate. When the cream has cooled down to 30°C fold in the beaten cream.  Pour the mixture into the prepared cake ring then top with the apple filling. Place in the fridge for about 30 min.

For the topping remove the apple core and cut the apple in very thin slices. Cook in apple juice until tender (about 1 min). Use the best looking slices to form a apple rose. Place the other apple slices on Top of the torte like a fan and place the rose in the middle. Now measure the apple juice and fill to 100g if necessary. Mix with agar and let it boil for 2 min. After the mixture cooled down to 60°C spoon it carefully over the rose and the apple slices. Cool for another hour before serving.