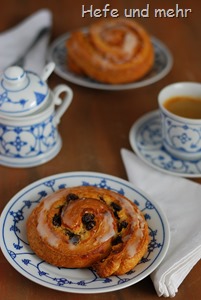 Since laminating the dough for the Tebirkes was so easy, I  wanted to test this method and make some Danish raisin rolls (Rosinenschnecken in German) for a lazy sunday afternoon. The only problem was the fact, that raisin rolls contain R-A-I-S-I-N-S and my love don’t like them at all. And so I needed a filling which would be fine and moist even without raisins. After some musing I decided to go for a Creme Frangipane, which is a mixture of pastry creme and a almond mixture.

The dough for the danish contains some cream, which makes the crumb soft, and a big piece of sweet starter for a good flavour and a good rise. For laminating I used again the method of dividing the dough into pieces and rolling them into four rectangles. Then I placed thin cut butter pieces on them and stacked them. The dough stack was then rolled again and followed by two single folds and a half fold.

The Danish pastry turned out as well as I hoped for: A moist filling, lots of buttery layers and a aromatic crumb. And – at least for me – full of raisins 🙂