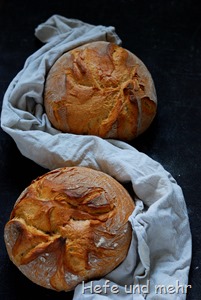 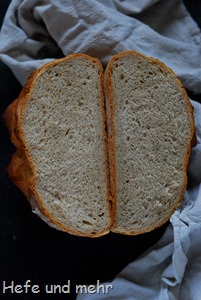 Knead all ingredients for the dough for 10 min by hand. The dough should be now soft and a little bit sticky.

Let the dough rise for 1.5 hour at room temperature.

Place the dough on a lightly floured counter. Flatten the dough a little bit and start to fold the dough in the middle. Repeat until a springy ball has formed. Place it seam side dpwn in a proofing basket or in a bowl lined with a well floured kitchen towel.

Transfer the bread directly on the hot baking tray. Throw a handful of ice cubes into the hot metal vessel of the oven and bake for 10 min on 250°C. Then turn the temperature on 190°C and bake for another 40 min. 10 min before the end of baking, open the door shortly to release the steam.