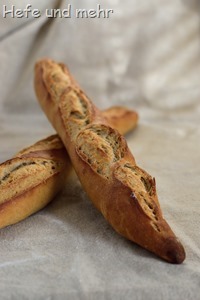 Having a cold means for me today, that I had to stayed warmly tugged under a blanket on the sofa instead of baking bread in a wood fired oven. To avoid getting to grumpy about that fact I decided to look back on past baking adventures:

For Christmas eve I promised to bring some baguette.  And as I felt adventurous I decided to try the Emmer Baguette I was thinking about since I baked the emmer ciabatta last autumn. The white emmer flour which I used lays somewhere between Type 812 and 1050. So it has still a good portion of bran.  To enhance the gluten network I opted for enzyme active bean flour – just like I did for the spelt einkorn baguette. And it worked surprisingly well, leaving me with a dough which was easily shaped to a baguette. It hold it shape very well during proofing and had a gorgeous oven spring. The crumb was not as open as I wished for – I guess it is due to the weaker gluten network of emmer compared to wheat or spelt. But the flavour makes us forget about this very fast, as it is at the same time creamy and nutty. So they are a delicious addition to the baguette family on the blog.