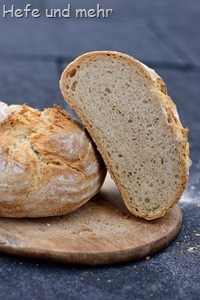 The second bread for my regional bread collection is one I know well: a crusty bread from the rhineland, called “Rheinisches Krustenbrot”.

These crusty breads you can find in different parts of Germany and they vary in the amount of rye which is added to the dough. I know it as a mild bread with only 10% rye flour added. It is baked with seamside up which creates the typical rustic look of this bread. It has a light, fluffy crumb and – as the name suggested – a thick, crunchy crust.

Mix the ingredients of each sourdough and let it for 14 hours at 25°C.

Knead all ingredients 5 min at the slowest speed and 8 min at higher speed until medium gluten development.

Divide the dough into two parts and form to two oval breads. Place in two floured proofing baskets, with the seam side up.

In the meantime heat the baking stone at 250°C .

Place the breads in the oven with steam. Turn the temperature back to 175°C after 10 min and bake the bread for another  50 min