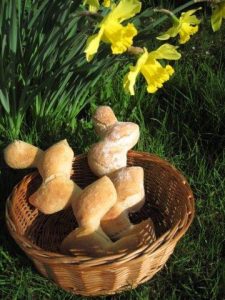 I promise to bake some bread for an Easter-Dinner with my parents. It’s been a long time since I baked Baguette, and there are so many nice recipes in “Advanced Bread and Pastry” that I had not to think about what kind of bread I want to bake.

The recipe I choosed worked fine and forming the baguettes was easly done. But when I tried to put the first Baguette to my peel, I realized that it was to big! But thats no problem, I thought, the oven is longer than the peel. I take second peel to support the part of the bread that did not fit to the peel and  transported the bread to the oven. When I had the baguette halfway on the stone I realized that the oven was to small for my baguette, too! I pushed the loave somehow into the oven, produzing a funny bended bread that deserve not the name baguette. END_OF_DOCUMENT_TOKEN_TO_BE_REPLACED