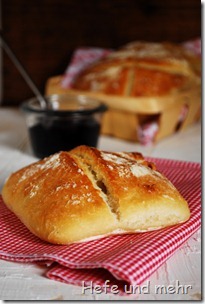 Christine mentioned in a comment to the Overnight-Krustis, that a recipe for kneading with hand would be nice. That is true, of course and so I tested for the next rolls a variation without kneading by a machine. Really kneading was not necessary either, because the gluten network was developed by folding the dough every 30 minutes for 2 hours. After folding 3 times the dough had a nice silky sureface, telling me that the gluten network was now fine.

For Forming the rolls I tried a new Idea. After folding the dough into a square I used my dough scrapper to cut it into smaller squares. After I placed the rolls on baking tray, I used the dough scrapper again, pressing it lengthwise for about 2/3 into the roll. Then I left the rolls to proof overnight. The next morning I just had to place the tray in the hot oven without fussing over slashing rolls. They had a nice ovenspring and cracked nicely along the imprint I made with the dough scrapper.