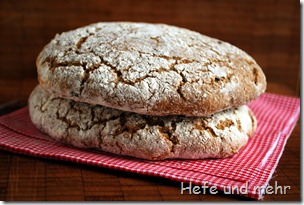 I needed a small present for one of my colleagues. I know that he and his wife like to spend their vacations in South Tyrol and that they fell in love there with Vinschgerln – a rye flatbread, flavoured with caraway seeds, fennel seeds, coriander and “Schabziger-Klee” (Trigonella caerulea ). And I knew also that they tried to bake this bread but their recipe did not work proberly for them.

And so I decided to bake some Vinschgerln for them and give them the recipe, too. I made a little recipe research in the internet and found quite a lot recipes. But some contained not enough water, other recipes had to much yeast and some had a mixture of spices that seemed not original to me. Wikipedia described Vinschgerln as a Bread containing about 70% whole rye flour, and named al the spices needed, and so I decided to build my own recipe.

The bread I bake with this recipe is delious – packed with flavour of rye, spices and and sourdough.