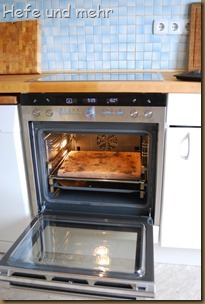 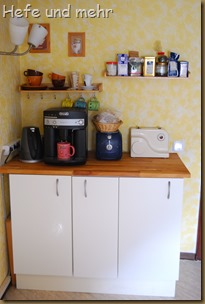 The next day we sanded the old wooden counter top on the other side of the kitchen and oiled it freshly. Now the kitchen looks brand new and beautiful and smells like fresh wood. The rest of the flat is still a mess and we are still busy to tidy up again.

But when you are already here with me in the kitchen, let me follow up a promise and show you my baking equipment!

One of my favourite things in my kitchen is the Kitchen maschine “Maximahl”, which is really old but dearly loved thing! I own accessories which was ever sold: a grain mill, three (!) mixing bowls, a shredder, a appliance for for making rolled grains, a food processor, a mincer with pasta attachment. 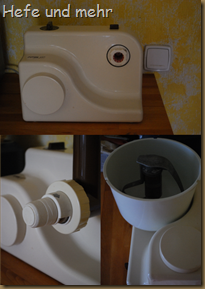 As Bread baking stone (which you can see in the first picture inside the oven) I use an inexpensive fireclay stone which I bought some years. It meassured 40cm x 30 cm x 2,5 cm.

For a scale I use a normal digital one and a small precision scale. I like a precision scale more than a spoon scale because it is much easier to handle and it was cheaper as well.

Then I always have my Timer always in my reach, just like my metall Dough scrabber.  I own a Baker linnen / couche as well as different Bread forms which are made out of wood pulp, rattan or (really new bought) poplar wood with linnen inset.

For making steam I use a handful ice cubes which I throw on a old cooking sheet which I heated together with the baking stone. When I run out of ice cubes, some water is fine, too

And you saw the new Oven (Siemens EQ861EV01R) already above!

And becaues Steph from Kleinen Kuriositätenladen collects at the moment “Behind the scene” posts I will tell you that my cookbooks a distributed between kitchen, living and sleeping room because the space in space is rare in the kitchen.  Only the books I use a lot at the moment I have on top of the kitchen cabinet. And because Steph asked for a picture of the photo setup: 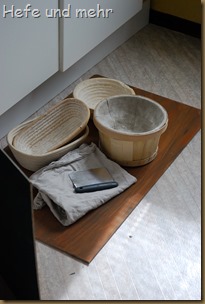 As backdrop I use painted plywood. Depending on the angle I want to photograph I put it on the floor, on the counter or on a stool in front of the window. I reflect the light with a white board or with an old mirror.