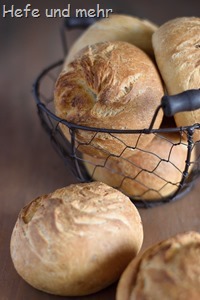 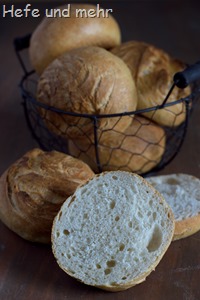 Mix the ingredients of the sweet starter and let it rise for 4 hours at 30°C.

Divide the dough into 95g portions. Flatten the dough a little bit and start to fold the dough in the middle. Repeat until a ball has formed.  Cover and let rest for 10 min.

In the meantime mix butter, cinnamon and salt for rubbing and spread half of the butter on the countertop.

Place one of the preformed rolls on the butter and lay your hand on the dough. Start to circle your hand fast while bending the hand slowly, to create tension on the dough. On the bottom, a little hole will form. To enhance the rubbing effect, repeat this on a not buttered part of the countertop. Press the rolls a bit down and place them with the fatty side facing down on a slightly floured couche.

Turn the rolls, so that the fatty side is upside, and place them on a paper lined baking tray. Mist with water and bake with steam for about 25 min at 225°C. For really crisp rolls turn to convection mode during the last 5 min.

Biga Variant: If you want to use a biga instead of a sweet starter, mix 165 g flour Type 550, 80g water and 1g of fresh yeast. Let the biga ferment in the fridge for at least 16 hours.