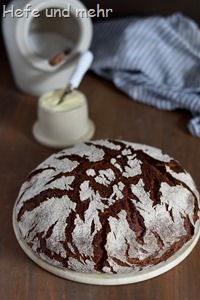 In January a reader asked me about a recipe for dark bread with lots of rye, but without Sourdough. I needed time to think about a recipe, but finally a recipe began to form in my head. As rye needs acid for baking, I choose butter milk as liquid. The complex flavour is created by a rye poolish and a soaker made out of dried whole grain bread crumbs. The bread is in the style of a dark farmers bread with 70% rye. The buttermilk adds a noticeable but mild acidity like you would find in a mild sourdough bread.

To create the fine cracked pattern on the crust, the loaf are turned on the peel already 20 minutes prior baking and left uncovered. This results into a slight drying of the skin of the loaf and as is spread a bit during this time as well, it will create cracks on the surface. Adding steam after 30 seconds of baking will enhance the effect as well.

After all, it is a good bread with a moist, regular crumb and a thick, flavourful crust. And as it is made without sourdough it is although a nice start for bread baking beginners who want a easier start into rye breads.

yields 1 Bread of about 1 kg 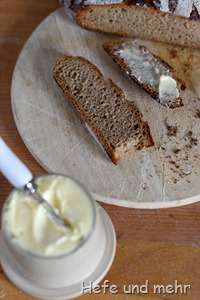 Bring the buttermilk for the soaker to boil. Some protein flakes will form, but just ignore that fact. Stir in the bread crumbs. Let cool down to room temperature.

Let the dough rest for 45 min. 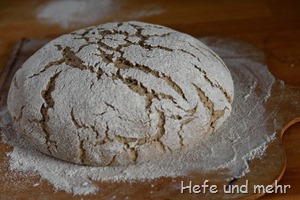 Turn the loaf on a well floured bread peel and let proof for another 10 min uncovered. Cracks on the surface will form during this time.

Place the loaves in the oven. Bake for 30 seconds, then produce steam in the oven. After 10 min, release the steam and reduce the temperature to 180°C and bake for another 50 min.