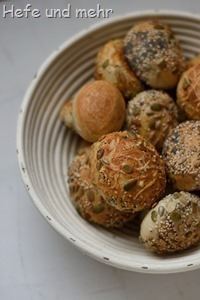 We spent a relaxed New years eve with some dear friends and I promised to bring bread. As always, I like to bring a wide variety and so I decided for caraway seed bread, wheat and rye bread, and my favourite spelt, nut and fruit bread. As addition I liked to have small rolls, similar to the little rolls my mum sometimes bought when I was little. They were called bread confection and where turned in a mixture of cheese and different seeds.

For my own variant I decided to go for a classic roll dough with some active malt and sweet starter for flavour. And as I did not planned to spent a lot of time with weighting 32 to mini dough portions I divided the dough into four equal parts and rolled them into strands. Each strand was then cut into eight equal sized parts and each piece then turned in the cheese mixture. That went very well and easy.

The resulting rolls turned out even better then I hoped. They gained a good volume due to the malt and a bit of egg yolk as lecithin source while the sweet starter gave them a good flavour. Just as a good roll should be!