Nearly a year has passed since our visit in Alsace in our summer vacation. One of the souvenirs  I brought home after two splendid weeks in france was a clay baking form for Kougelhopf. It is sitting on my kitchen cabinet since then, waiting for me to create a recipe for Kugelhopf.

This weekend I finally found the time to study different Kougelhopf recipes. But I did not like them, all of them use a lot of yeast and give the dough no time to rest properly to develop a good flavour. And I wanted a recipe which uses a preferment for better taste and longer shelf life! And so I decided to use my own interpreation with a sweet starter which helps to rise the buttery dough without using a lot of yeast.

The cake is more time consuming then other recipes you may find in the web, but it develops a fine complex flavour and light and feathery crumb. I imaging that even my alsacian great-grandmother would have enjoyed it!

END_OF_DOCUMENT_TOKEN_TO_BE_REPLACED 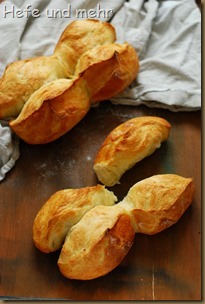