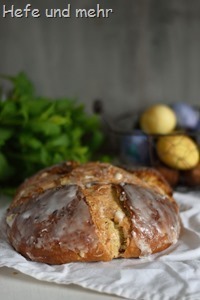 For our Easter Brunch with the family I baked different goodies: a varity of roles, easter bunny buns, a cake with rice pudding and an Easter Bread. The Easter Bread is this year nearly a brioche as it contains a generous amount of butter.  The amount of butter and the addition of fruits and nuts makes it necessary to knead the dough to full gluten development. This needs some patient but you will be rewarded with a tender and light crumb which can be torn into long pieces.

The subtle flavour of the sweet starter is accomplished by a mixture of vanila, orange zest and saffron. As an addition the dough contains raisin, almonds and pearl sugar which makes it one of the richer ones in my repertoire.  It is a delicious bread which needs no spread, even butter is not necessary, it is able to shine all by its self! END_OF_DOCUMENT_TOKEN_TO_BE_REPLACED 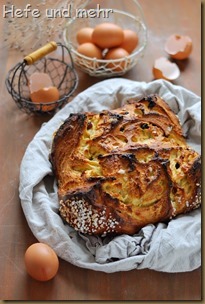 Last weekeend I realized how near Eastern is when my mom told me on the phone about her plans of dyeing eggs with her kids at school. And so I changed my plans for the bread baking course and developed a sweet recipe perfect for the Easter Breakfast. It is a sweet bread called which is made with the biga preferement. The subtle acidity of it helps to strengthen the gluten network. For a tender crumb the dough contains cream, egg yolk and some butter. By replacing the butter with cream the dough can rise in the fridge if needed.

For all doughs with a lot of sugar or butter it is important to develop first the gluten network before butter and sugar. Both can inhibit the gluten development. The fat in the butter can coat the gluten proteins so that they can not connect with other gluten proteins to form strands while the sugar draw the water away from the proteins which again strongly reduce the forming of gluten strands. That’s why we will add the sugar in small increments after 10 min of intense kneading. You will realize while kneading in the sugar that the dough will become softer. This is due to the water which is no longer bound by gluten proteins because of the sugar. END_OF_DOCUMENT_TOKEN_TO_BE_REPLACED 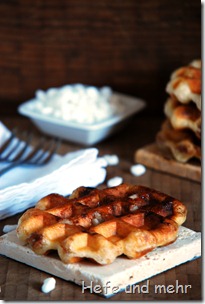