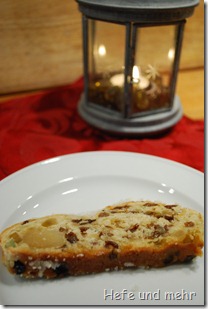 After a week with experiments which seemed to fail one after another and long evenings spend in lab to figure out what went wrong, I was not in Christmas mood last weekend. Friday night I leave the lab happy because of one experiment worked at least, but I was so exhausted that even baking seemed to much work on this weekend.

But then I realized that if I want to have a stollen for Christmas that rested at least two weeks (four weeks would be better) I had to bake it now. I had all ingredients on hand, only a recipe was missing. Looking through my bookmarks I found that I bookmarked two different recipe for this year: Dan Lepards recipe for a  extra moist Stollen and the recipe for Thüringer Stollen from Bäcker Süpke.

But what recipe should I choose? Both sounded good but although had small details I did not like so much. Bäcker Süpkes stollen seemed to have to less liquid (something he changed now) but I like the amount of fruits and nuts very much, Dan Lepard worked with cooked flour (similar to water roux), a unusual but fascinating idea, but I did not like the idea of eggs in a stollen and the amount of fruits was to low in my eyes. So what to do? In the end I take inspiration from both recipes and created my own version.

This version use a water roux as well as a preferment, contains lots of raisin 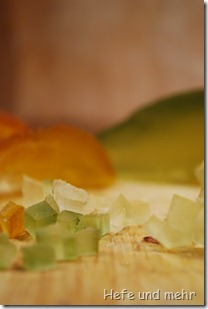 s, almonds and candid orange and lemon peels, and lots of butter. The dough was soft, but easy to handle and the stollen keeps its form very well.

After one week (which was as busy as the last one) I could not resist any longer and cut some slices for us: A nicely moist crumb with a delicious flavour of vanilla, cinnamon and cardamom. Even my raisin-hating boyfriend eat a slice!

I am sorry but I am to late for the Holiday Editon of Yeastspotting, but it is the perfect post for  Bread Baking Day # 25. The host of this month is  Cinzia from Cindystar. Until 1.January 2010 you can send her Entries for “Baking under the Christmas Tree” for her  updating Round-up .

The evening before: Mix almonds, raisins and rum in a bowl, then add boiling water until the fruit mixture is covered with water.

The next mornig: Mix flour, milk and yeast for the preferment. Ferment until the size double. For the water roux whisk water and flour until lump free, then heat it up to 65°C (needs about 3 min) while whisking. Fill the water roux in a bowl, cover its surface with cling foil and let it cool down to room temperature.

Rest for 30 min. Drain raisins in the meantime and chop the lemon and orange peels finely.

Knead the fruits in the dough. Knead just as long as you need to incorporate the fruits.

Divide the dough and rest it shortly.

Glaze with melted butter and sprinkle thickly with sugar. Let it cool overnight, then cover thickly with powdered sugar and wrap in alu foil. Store it at a cool place for at least one week (better two or more).