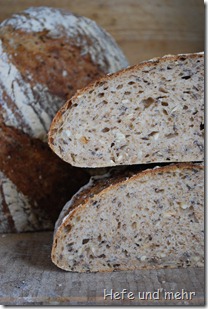 I did not planed to post this recipe (I posted some similar recipes already) but the boyfriend praised this bread so much that I decided to write it down in case he asked me to bake it again.

For this bread I had to smuggle sunflower seeds in the house and to my surprise he did not find it in the pantry. But as soon as I opened the package he appeared in the kitchen and started to nibble the seeds. But at this time I had the amount I needed already weighed.

I used two preferments for this bread: Sourdough and Pâte fermentée which gave a lot of flavour to the bread while the soaked rolled oats and flax seeds made it nicely moist.

In picture on the right side you can see why the oven was broken. The fuse is so much burned that I am relived that oven just turned itself of and did not burn down!  The repair cost 80 Euro that is 10 Euro less then calculated so I am happy! I’m just hoping that this fuse will last  longer then two years!

And before we finish all bread I sent this recipe to Susan’s weekly Yeastspotting.

Mix all ingredients for the Pâte fermentée and proof it for 1 hour at room temperature. Then put the dough into the fridge for 12 hours.

Mix the ingredients for the sourdough and ferment for 12 hours at room temperature.

The next day: Cook the spelt in water until soft (about 40 min) and let cool down.

Soak the rolled oats and flaxseeds in hot water for 1 hour.

Toast the sunflower seeds and the sesame until golden and let cool down.

Now mix the different flours with the water, yeast, pate fermentée and the sourdough and rest it for 20 min (Autolysis).

Now add the salt and knead 5 min ad the slowest speed and 5 min ad higher speed until medium gluten development. Pour the remaining water from the soaker away. Then add the Soaker, the spelt and the seeds to the dough at slow speed, knead just as long as needed, so the gluten will not be destroyed.

Now place the dough in a good oiled container and ferment for 3 hours. Give the dough three folds during this time.

Folding: Flour your countertop and  put the dough on it. Flat the dough carefully to a square. Now fold the right and the left side to the middle, then from button and top, too. You can find a nice tutorial here.

After fermenting divide the dough into two equal parts. Preshape into a square. Rest for 20 min. Then form in a bread and proof in brotforms for 90 min.

In the meantime heat baking stone in the oven to 250°C.

Slash two times and bake the loaves on the hot stone for about 45 min with steam, until the crust is golden brown.