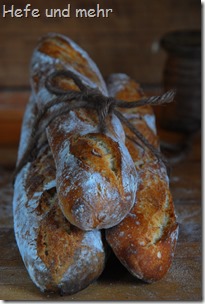 The Newspaper Tagesspiegel published an article about Ridha Khadher, who’s Baguette was the only one which get 20 of 20 points in the Best Baguette of Paris award 2013. In the articel, Monsieur Khadher mentioned the ratio of water and flour (T65) he uses, and gave a rough overview about the procedure. It was enough for me to build a recipe out of that.

I decided to use flour Type 550 instead of T65 flour because it is nearly impossible to get this flour here, but for the rest I followed  Monsieur Khadher instructions. And I’m very pleased with the outcome. The baguette has a mild, nutty sweetness. It is milder in taste then the Baguette a la Julien und Cohier which has a more tangy flavour with a strong malt note. It’s notable how little changes in dough temperature and fermentation time can change the flavour profile of a bread!

Both recipes make great baguettes, so don’t ask my to decide which is better. I like this baguette with a mild goat cheese or a slice camenbert, and so I have finally a Bread for this month’ BBD as well!

In the meantime divide into pieces of 200g and preshape into squares. Rest for 20 min.

Then roll  gently into baguettes of 30 cm and proof on a couch for 35 min.

Slash three times and bake the loaves on the hot stone for 25 – 30 min at 250°Cwith steam, until the crust is golden brown.