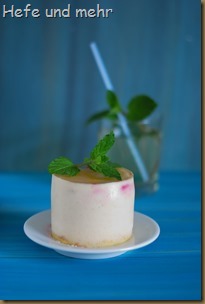 When I looked through my freezer two weeks ago I found some red currants from last year and some peaches, which seems to hide themselves when I was baking peache torte in February. Looking on the the berries and peaches I decided to bake some little mousse tortes.

For the Sponge I used a recipe from Matthias Ludwigs . He whips the egg white together with starch to soft peaks. I could not believe that it should work but it did! It helps to fold in the flour, starch and egg white in the dough without loosing its volume. For the filling I created once again my own recipe.

Because pentecost was a really warm day, I froze the tortes for four hours. And even then the 15 minute ride in the hot car was enough to defrost them. At my parents place, we enjoyed them together with iced coffee, ginger basil lemonade and an elder flower lemonade in the shadow on their veranda. There is no better way to spend a summer sunday! 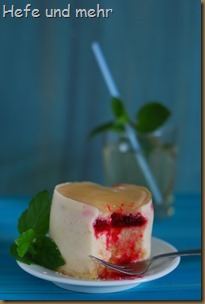 Raspberry – Red Currant – Disc: Bring the berries to boil and cook them until soft. Pass through a sieve. Measure 275g of the puree and bring it with sugar and agar to boil. Let it boil for about 2 min, then fill in the 7 wells of a muffin form. Freeze for at least 2 hours.

Sponge: In the meantime whip egg yolk and powdered sugar until foamy. Bead egg white with sugar and starch to soft peacks. Fold 1/3 of the egg white under the foamy egg yolk, then put the remaing egg white on top, sift the flour over the egg white and fold everything carefully into the batter.

Spread the dough on a baking tray and bake at 180°C (convection mode) for 10 min. Let cool down.

Assambly: Cut round sponge disc in the size of the cake ring. Fill with 2/3 with Peach mousse, then lay the rasberry-red currant-disc on top. FIll in remaing mousse. Freez for 2 hours.

Jellly:  Bring lemon juice, white wine and gelling sugar to boil and let it boil for 3 min. Let cool down a little bit, then distribute over the tortes. Cool the tortes for another 2 hours before serving! 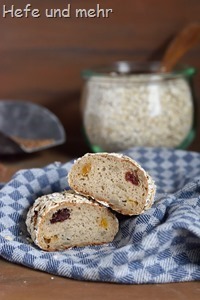 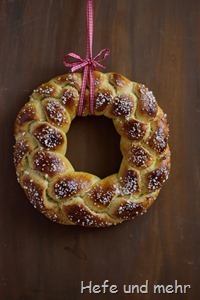 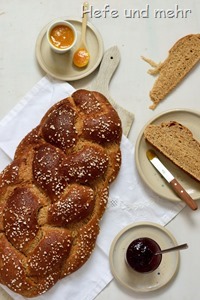