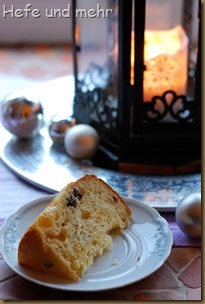 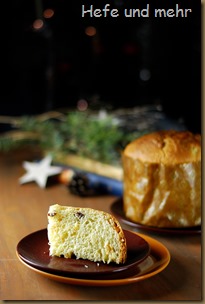 Mix all ingredients for the Sweet starter and let it rise for 2-3 hours at 30°C until the volume doubled.

First dough: Mix all ingredients to form a homogenous dough. Ferment for 1.5-2 hours at 30°C until the volume doubled.

Second dough: Mix first dough with the other ingredients for the third dough and ferment it for 1.5-3 hours at 30°C until the volume doubled.

In the meantime pour boiling water of the raisins and let them soak for 15 min. Strain them and pat them dry between kitchen tissue.

Third dough:  In a stand mixer mix the third dough with flour, honey, spices, water salt and egg yolk and knead for 5 min at slow speed. And another 6 on fast speed until medium gluten development.

Now add 20g sugar and mix on slow speed for one minute.

Add another 20g sugar and continue mixing for one minute. Continue like this until all sugar is incorporated.

Ferment for 3 hours at room temperature. The volume should triple in this time.

For Forming the Panettone first prepare the Paper molds: Insert two skewers per mold all way through the mold directly over the bottom of the mold, so that it sticks out from both sides for about 10 cm.

Now grease the counter and your hands very well with butter to prevent the dough to stick. Divide the dough into 3 equal parts (about 500g) and shape into balls. Place in the paper mold.

Proof for 10– 20 hours until it reach the top of the mold(Proofing time depends on room temperature and strength of the starter).

Prior to baking cut a cross in to panettone and place a pieces of butter (about 5g) in the middle of the cross.

Direct after baking hang them upside down between two chairs or into big pots and let them cool hanging for at least 4 hours. 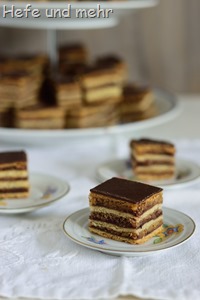 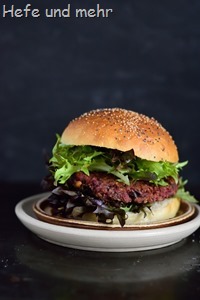 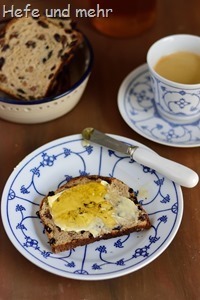