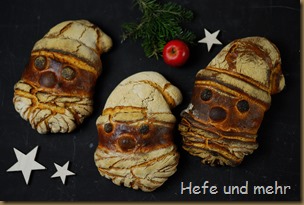 My entry for the christmas party in the lab looked like that: Bread (of course homemade). That was an easy decision. It was more difficult to decide what to bake. We are a very international team and everyone should bring something special from his country. And so I decided to honour the swabian part of my family history and baked pretzels. For the second kind of bread I chose my favourite bread. With this dough you can do every “mischief” you can imagine when forming a bread. And so I decided to bake a Santa Claus bread. I saw similar breads before but I did not like the fact that they were painted with food colouring and the way how they were formed did not fit to my ideas complexly either. But I had my own ideas already…

… and the ideas worked well and the breads turned out to be the most photographed part of the buffet. And one colleague asked me to bake such a bread for christmas eve  for her (what I will love to do).

About the bread itself I can just repeat what I said before: It is delicious crusty with a soft crumb and great flavour.  It is my personal favourite. And that makes it a good candidate for Michas new permanrnt blogevent where she looks for “Undiscovered Blog Buster” (german: Der Unendeckte Blog Buster =DUBB)!

Mix water, flour and starter for the sourdough and ferment for about 12 -16 hours at 25°C.

Mix all ingredients for the Pâte fermentée and proof it for 1 hour at room temperature. Then put the dough into the fridge for 12 hours.

The next morning knead all ingredients 5 min at the slowest speed and 8 min at higher speed until medium gluten development.

Divide the dough into three parts of 400g and three parts of 150g. One Santa is made out of one 400g piece and one 150g piece. Roll the 400g pieces into balls. Flatten them on one side with a rolling pin to form a pointed end. The “flaps” of dough  are folded under the loaf and the tip is gently rolled to a long drop shape. 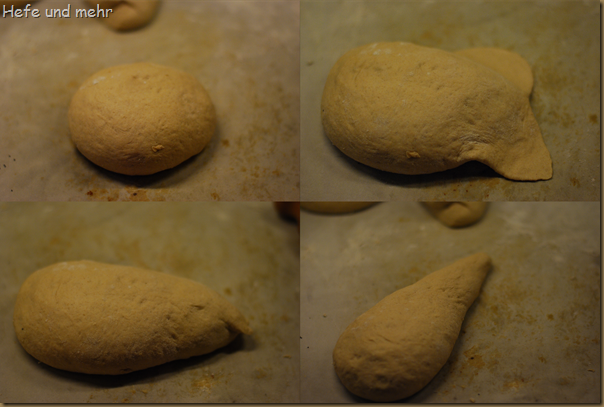 Fold over the tip of the “drop” . Now take two 30g portions of dough from 150g pieces of dough. Roll one to a ball and put it on the tip as pompom. The other one is rolled to a strand and placed across the loaf as the rim of the hat. Tuck the ends of the strand under the loaf and dust the hat with flour. This works best when the rest of the loaf is covered with a paper towel to keep it clean.

Now make two small dough balls (about. 5g) and a bigger one (8g). Wet the small balls and dip them into poppy seeds. Place them on the loaf as eyes, and the bigger one as nose.

Flatten the remaining dough and cut it into stripes. Twist them and place them under the nose as beard. Dust the beard as well with flour 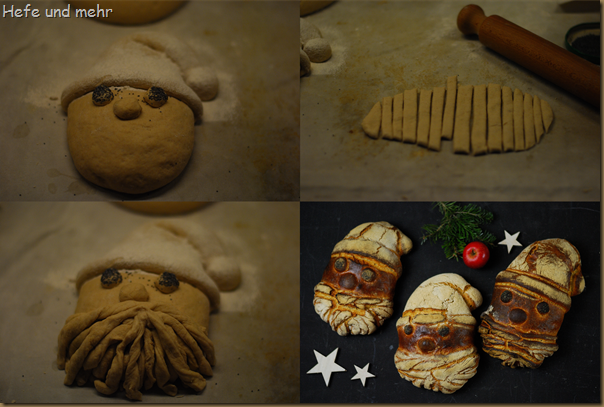 Proof for 1.5 hours (after 45 min one of the loaves can be shifted to the fridge if you don’t have the space to bake all breads in parallel)

Preheat the oven with the baking stone to 250°C.

Place the breads in the oven with steam. Turn the temperature back to 200°C after 10 min and bake the bread for another  25 min .