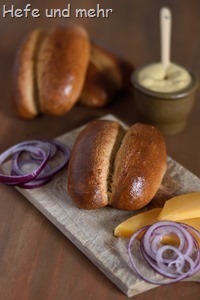 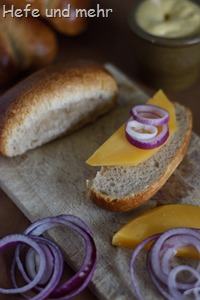 Mix all ingredients for the sourdough and let it rise for 14-16 hours at 25°C.

Knead all ingredients for the dough for 5 min at slow speed, then 10 min at fast speed. The dough should be now soft, but not sticky.

Divide the dough into 50g portions. First form round rolls, then roll them long.

Place always two rolls next to each other on a baking tray.

For glazing roast the starch until golden, then cook the starch with water and let cool to room temperature.

Brush the rolls with the glazing and bake with steam for about 20 min at 240°C. For really crisp rolls turn to convection mode during the last 5 min.

Glaze the bread again immediately after taking it from the oven.