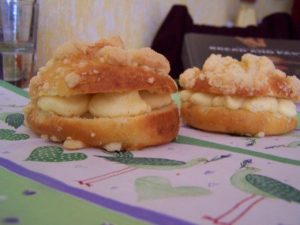 I planed to bake brioche since months. In my new favorite baking book “Advanced Bread and Pastry” I found three diffrent recipes, using no preferment, sponge or prefermented dough. I liked the sponge most because I had not to rember to put the dough into the fridge after one hour.

The look of the Brioche Tropézienne turned out not as nice as I expected. Part of the streusel topping slipped of the top. Maybe because I do not bake it in small round pans  like the recipe asked for. Maybe that is a good argument for buying a muffinform, because nevertheless they taste great!

Mix the incredients for the sponge and ferment it for 10 to 12 hours at roomtempeature.

At the next day knead the Sponge with eggs, milk, flour, salt and yeast in the kitchen machine for about 10 min (intensiv mix), untill the gluten is fully developed. Now add the sugar in small portions. Always wait untill one portion is fully incooperated into the dough before adding the next one. After adding the sugar add the butter following the same scheme.

Proof for one hour.

Devide the dough into pices of 50g and form to boules. Refrigerate them for 30 min. That will make the handling while forming the brioche easier.

After the resting roll 12 bouls to disks with a diameter of 10 cm and glaze with whisked egg. Proof for one hour.

For the “normal” Brioche form the remain pieces to nice bouls. Because I do not own brioche forms, I place them into a small springform (diameter 18cm) and into a small breadpan. Glaze this brioche with egg to and proof for one hour.

After the proofing glaze the brioche with egg again and top the Brioche Tropézienne with streusel.

Let the Brioche Tropézienne cool while preparing the vanillacreme.

For that boil the Milk with agar, salt and sugar. Mix the yolke with the starch and stir this into the boiling milk. Boil the mixture for around 2 min, stiring constantly,  then remove it from the heat, add the butter and stirr untill it is mixed completly. Pour the cream into a bowl and cover the sureface with plastric wrap to prevent skin forming.

Now boil sugar, glucose and water untill its reach 121°C.  In the meantime whipping the egg white. When the sugarsyrup reach the temperature, slowly pour it into the egg white while whipping. Keep whipping untill it cool down to 40°C.

Now fold it into the custard and fill the cream to a piping bag.

Slice the cooled Brioche Tropézienne and pipe the cream immediately on the bottom half. Freeze for 5 min to harden the cream, then top with the reamining brioche half.