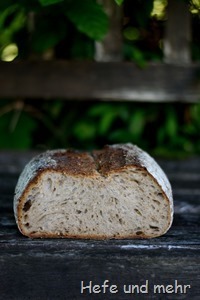 Some breads sneak their way into my my mind and stay there for awhile while my subconscious mind works on the recipe. This time it was a short sentence about a bread MC from Blog Farine tasted in Sandeep Gywalis Bakery: Porridge and roasted buckwheat, filled with many complex flavour notes. There was not much more information but this was enough for my brain to come up with a recipe.

The monthly bread baking day in the  local museum Bergneustadt was the perfect opportunity to bake the bread. Because what can make a delicious bread even more delicous? Right – baking it in an old wood fired community oven! And so I roasted the buckwheat the night before and then milled the roasted kernels to a fine, dark brown flour. The smell of the flour was astonishingly delicious: Malty and buckwheaty notes creates a rich and deep flavour. And it was suprising how much water the flour needed when I mixed the sourdough with this flour. The sourdough developed rather strong sour note.

To balance it I added a some maple syrup and to help against the slight destabilizing effect I added some psyllium hulls, too. The dough was then very easy in handling and after baking the bread still had well recognizable smell of buckwheat. It was hart to resist the tempation to rip directly a piece of the bread when it came out from the oven.

But after the bread cooled to a considerable temperature I finally took a bite and was very happy. The bread has a mild flavour, the sourness of the sourdough has vanished into the background. The buckwheat flavour notes are clear and complement nicely the nutty flavour of the oat and the sweetness of the maple syrup. Once again a favourite! 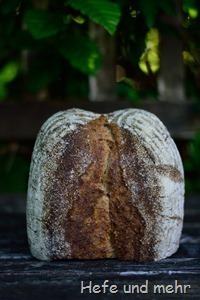 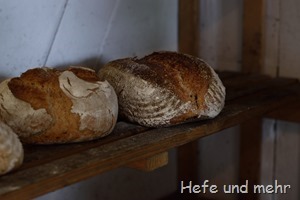 Mix water, flour and starter for the sourdough and ferment for about 10-12 hours at 28°C.

In the meantime bring water for the porridge to boil, stir in the steel cut oats and cook until it starts to bubble. Remove from heat and keep in fridge till the next morning.

The next morning knead all ingredients 5 min at the slowest speed and 8 min at higher speed until full gluten development.

Let rise for 3 hours, folding the dough three times during this time .

Divide the dough into two parts. Form to long loaves, press a small wooden stick lengthwise down to form a small hinge, then push the loaf back together and  and place it in the proofing basket seam side down.

Proof for 1 hour, heat the baking stone at 250°C in the meantime.

Place the breads in the oven with steam. Turn the temperature back to 200°C after 10 min and bake the bread for another  45 min  (or bake in a wood fired oven).