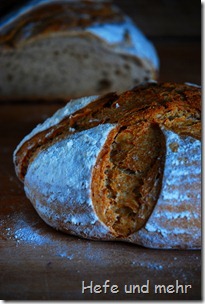 Lutz baked a swabian Potato Bread last year, a little bit later there was a modified version on  Grain de Sel, which Petra baked, too. I realized the recipe then and decided to bake my own version of this bread.

I increase the sourdough and preferment amount as well as the amount of potatoes but decrease the yeast amount. After I had such a good experience with old bread (aka bread crumbs) in preferment I decided to add the bread crumbs to the preferment.  Instead of oil or lard I preferred Butter.

The bread is very delicious with a soft cumb and a thick, crispy crust. It is very aromatic because of the two preferments, and the higher amount of bread crumbs adds a nice nut-like flavour to the dough.

This is a new favourite!