January is nearly gone and the deadline for Bread Baking Day  is near. Jenni from The gingered whisk would like to have a bread fashion show this month. And this is not an easy topic for me. I struggled hard this month to find a good idea how to decorated my bread. Because most of the time I choose soberly some straight slashes when I bake bread. I was near to give up and wait for the next BBD!

But the weather this weekend changed from snow to rain then to rain and snow to freezing rain and back again and forced me to stay indoors. A good time to snuggle myself in a blanket and do some surfing in the web in search for inspiration. Finally my creativity was awakened and a plan was formed.

As basic  for the decoration – and we want a good basic, of course – I decided to make a light wheat bread with some additional rye, sourdough and Pâte fermentée for a more complex taste.

END_OF_DOCUMENT_TOKEN_TO_BE_REPLACED

During Christmastime I always have a wide variety of baking ingredients in my storage cupboard. And so every January I have to face the fact that I have a lot of leftovers which have to be used in the next time. A good example is the Marzipan I had left from baking Stollen.  And what would be a better treat for a chilly weekend in January then lukewarm Marzipan Snails with a cup of hot coffee?

The dough was quickly made in the morning – a big batch of preferment was already waiting in fridge. The handling of the dough is easy, it is a soft but not sticky dough. When cutting the Snails they kept their form very well.

For the filling I kneaded Marzipan with butter – a very greasy work – before I added sugar and egg and creamed it with a handheld mixer. If anyone has a better idea to mix the ingredients to a smooth filling, please tell me!

The Marzipan Snails taste delicious with their soft and fluffy crumb and the delicious taste of marzipan.

END_OF_DOCUMENT_TOKEN_TO_BE_REPLACED 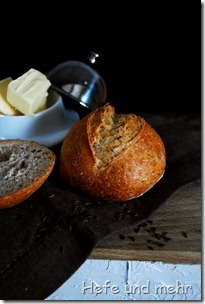 During lunch at work, a dear colleague and I discussed about bread making. I gave him some sourdough last summer as part of his wedding present as well as a recipe for Vinschgerl– a favourite bread of his wife and him. They bake this flatbread regularly but this time the taste of caraway seeds was overpowering the other fragrances, because the fresh batch caraway seeds he bought taste much stronger then the old one. “The bread taste more like a caraway flatbread”, said he and I was instantly dreaming of caraway seed bread.

I could not stop thinking about  Caraway seed Bread during the day and when I was home I decided to bake some. I made a dough with some whole rye and wheat flour and a good portion of caraway seeds. I added some whey – a leftover of cheesemaking – to the dough, too.

The bread was baked with falling heat which gave a nicely crispy crust to the bread. The bread fits well with some hearty cheese, but is very delicious with some butter and salt, too.

END_OF_DOCUMENT_TOKEN_TO_BE_REPLACED 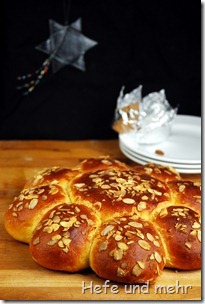