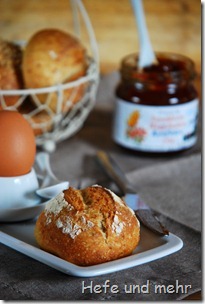 At winter mornings when one look out of the window make me shiver I need something warm and filling before I go out in the dark and cold morning to catch my train. A porridge made with rolled oats is easily made and a favourite winter breakfast since my childhood. Sometimes I buy a rolled grain mix instead of rolled oats to have a variation for breakfast. This grain mix contains rolled oats, wheat, barley, rye and spelt and is very delicious.

One morning I decided that I could add some porridge into a bread dough, too. And so I made some overnight rolls with rolled grains and porridge. The roll stay nicely moist but the dough was easily to handle, too.

For baking the rolls I used the same trick as for my “normal” rolls: I placed the rolls together with a small oven proof bowl on a baking tray, filled the bowl with boiling water and covered them with a second baking tray. The steam is trapped between the baking sheets what improved the oven spring quite nicely. It is similar to baking a bread in a dutch oven. After half of the baking time I removed the cover and the bowl.

With this trick the rolls turned out great. A soft crumb with a crunchy crust, a complex flavour due to the long rise over night which underlines the nutty taste of the rolled grains.

For the porridge boil water and grain mix until a  thick porridge has formed. Let it cool down to room temperature.

For the dough knead all ingredients for 5 min with hands, until a smooth but not sticky dough has formed.

Divide the dough into pieces of 85g for rolls. Form the dough pieces into rolls, slash them lengthwise and turn them on the slash.

On a paper lined baking tray, place a small oven proof bowl. Turn the rolls so that the slash is on the upper side again and place them on the baking tray, too. Fill about 100ml boiling water in the bowl and cover with a second tray . Bake for 15 min at 220°C then remove the covering tray and the bowl (be careful, it is very hot!). Bake for another 10 min until golden brown.