For quit some time I have an idea in my mind. I would like to start a small series of blog post with recipes and explanations for bread baking beginners where the single posts build on each other, explaining all the basics need. I would start with rather fast and simple recipes without kneading or forming and end with more complex recipes with a preferment.

What do you think? Would this be interesting for you?

For the beginning I come up directly with a recipe. It is a recipe for rolls made with some sour cream. They are delicious with a crisp crust and a soft crumb and perfect for breakfast on lazy weekends.

For me, baking these rolls is a good start to begin with bread baking. There is no kneading or shaping involved, only some time is needed because the dough rise overnight in the fridge. But we are sleeping during this time anyway so it does not matter so much. This long cold rise has some advantage. The gluten (that are the proteins that keeps wheat based dough together) can develop without kneading, the rolls develop a deeper flavour because of fermenting by-products  which the yeast releases into the dough and the next morning we only need another 45 min between preparing the rolls and pulling them from the oven.

During baking, one point is really important: Steam! Steam will help the bread to rise well in the oven when it condense on the still cold bread at the beginning of the baking process. It is although needed for a shining and well browned crust. For creating steam in the oven there are a multitude of different methods. For the beginning the easiest method is to place a metal ovenproof vessel on the bottom of the oven and heat it together with the oven. When placing the bread or rolls in the oven, just drop a handful ice cubes in the hot vessel.  They will melt and the evaporating water then create steam. 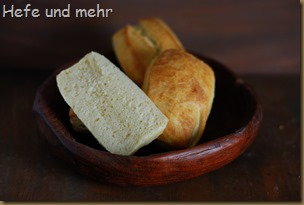 In the evening place dissolve sour cream, yeast and salt in the water. Add Oil and flour and mix to a homogenous dough. The dough should be soft but not sticky. Place the dough on the counter, flatten it and fold it from the sides into the middle, so that it forms a square parcel. Place it upside down in a oiled container and proof at room temperature for about 12– 16 hours.

The next morning heat the oven with a metal vessel to 250°C. 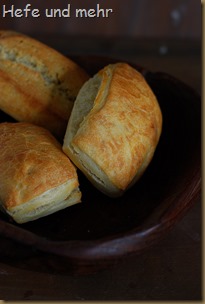 Transfer to a paper lined baking tray. If you want to slashed rolls, cut them lengthwise with a sharp, serrated knife, about 4 mm deep. But you don’t have to, uncut rolls will crack open on the sides in an more irregular pattern (like in the picture on the right side).

Put the tray  with the rolls in the oven, throw a handful of ice cubes in the hot metal vessel and bake for 15 min on 250°C. Then open the oven a jar and switch to convection mode. Bake another 5-10 min on convection mode for a crisp crust.