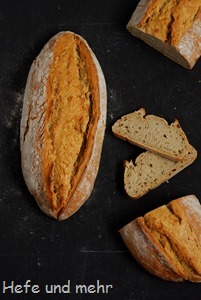 So here is now the promised Spelt bread. I know that many of the readers of this blog like to bake with spelt, but baking with spelt flour is a little bit more challenging then baking with  wheat flour, so the recipe comes relatively late in my bread baking course.

Spelt is closely realted to wheat. But there are two thing to keep in mind when working with spelt. Flour made from spelt contains a different composition of gluten proteins which finally results in a more fragile gluten network. This makes it easy to “over knead” spelt dough, meaning that the dough is kneaded longer then it takes to obtain full gluten development which ends in breaking down the gluten network once again. Due to this fact I prefer to knead spelt dough by hand which gives me a better control then kneading with the kitchen machine. If kneading with the machine it is important to keep a close eye on the dough and testing the gluten development by the window pane test. Intervall kneading (kneading shortly with breaks in between) can be handy as well.

The second problem whit spelt is its tendency to “bake dry”. A dry baked spelt bread has a dry crumb even when freshly baked. To prevent this it is a good idea to use a preferment in combination with a hot soaker made with boiling water mixed into flour or some flour cooked with water to a custard (called “Kochstück” in Germany). The starch in the flour will partly gelatinization in the hot soaker and completly gelatinization  when cooked to a custard. This binds the water and allows to increase water amount in the dough without impairing the dough structure.

For this bread I used the flour custard (Kochstück) in combination with a poolish for a aromatic bread with good crust and soft crumb. Some whole rye flour helps for a moist crumb and long shelflife as well as for a good flavour, but can easily be replace with whole spelt flour.

Mix the ingredients for the poolish and let it rise for 14-16  hours.

The next morning mix flour and water and bring to boil. Cover with clingfilm and let it cool down to room temperature.

Divide into two equal pieces and form into long loaves. For this preshape the dough into two balls and let them rest for 10 min to relax the gluten network for an easier handling. After 10 min flatten the ball and fold the upper half from right and left to the (thought) middle line (marked in the second picture). Then fold the so created tip to the middle as well. Repeat with the other half and then fold press one half gently on the other. Turn the bread on the seam and roll it gently a little bit longer. Place on a baking tray.

In the meantime heat the oven together with a metal vessel for creating steam to 250°C.

Cut the bread lengthwise with a sharp, serrated knife. Make show to keep a shallow angle between blade and loaf.

Place the baking tray in the oven and throw a handful of ice cubes into the hot metal vessel of the oven and bake for 15 min on 250°C. Then turn the temperature on 180°C and bake for another 35 min. 10 min before the end of baking, open the door shortly to release the steam.