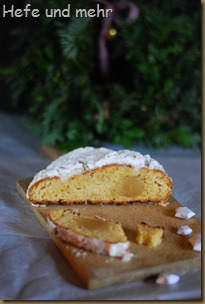 I do not make an changes on the recipe of my Christstollen, but some members of our family do not like raisins, and so they do not like Stollen as well. So an alternative was needed! Years ago I already baked a Almondstollen for them, but Almondstollen always has the tendency to get very dry. And that is not so surprising when you take out the ingredients that keeps it moist like raisins for example! But nevertheless I take the challange once again and baked a Marzipan Almond Stollen this year.

The basis for the recipe is the proofed and true recipe of my Christstollen, of course without the raisins and with more almonds. For moisture I use a water roux and added grated Marzipan as well, which adds a nice flavour, too. The fine almond flavour get enhanced from some Tonka bean, and for the classical stollen flavour I grounded candid orange peel in the food processor as fine as possible.

After two weeks of ripening we tested the stollen, and it was still moist. Not as moist as Christstollen, but so much better then every Almond stollen I ever baked before! And it taste very good, too! Maybe I have to bake to different kinds of stollen from now on…

The day before: Mix almonds with orange juice and liqueur and let them soak for 24 hours

The next mornig: Mix flour, milk and yeast for the preferment. Ferment until the size double. For the water roux whisk milk and flour until lump free, then heat it up to 65°C (needs about 3 min) while whisking. Fill the water roux in a bowl, cover its surface with cling foil and let it cool down to room temperature.

Rest for 30 min. Drain almonds in the meantime and chop the orange peels in the food processor as fine as possible. Grate the frozen marzipan

Knead the almonds, chopped orange peels and grated marzipan in the dough. Knead just as long as you need to incorporate them.

Divide the dough and let rest it shortly.

Glaze with melted butter and sprinkle thickly with sugar. Let it cool overnight, then cover thickly with powdered sugar and wrap in aluminium foil. Store it at a cool place for at least one week (better two or more).