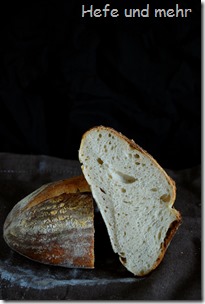 I baked already with wild yeast before it get popular in the different bread baking discussion boards. But then the wild yeast was still called “Raisin Sourdough”. After the first test I did not spent a lot of thoughts on this kind of yeast. The theory worked, so I started with new experiments…

Until I read about a “Apple Wild Yeast” somebody grew in store bought pasteurized apple juice.  But as we all should knew is pasteurizing a methode for conserve food. And that works by shortly heating up the juice (or milk or what ever) to kill all microorganisms. And that means, that even the precious “wild yeast” in apple juice is dead!

So what is growing in this apple juice? In most of the recipes, a spoon full of honey is added to the mixture. And as I explained before a lot of nectar is yeast can be found in honey. These nectar yeast start to ferment the honey as soon as the honey is diluted with water. This principle is used for brewing mead. Sometimes apple juice is added to the honey as a nitrogen source to speed up fermentation. But it can also be done only with water and honey. And so I started to think about growing wild yeast from honey…

Ten minutes later I had filled a glass with water and honey, and left it overnight on a warm spot. The next morning fermentation was already visible by a lot of bubbles appearing in the liquid. After 5 days nearly all sweetness in the mixture and the honey flavour had vanished and it smelled slightly alcoholic like young Federweißer or home made elderflower wine.

I mixed some flour with some of the yeast water and left it overnight. The next morning I was very disappointed when I checked the preferment: nearly no sign of life, only one or two little bubbles forming on the surface. That was the point I decided that the experiment failed.

When I cleaned the kitchen that afternoon I pour the happily bubbling honey mixture in the sink. And then I saw the preferment – nearly 24 hours after mixing it suddenly tripled its size and had a distinct smell of yeast. And the yeast water was just gone. Luckily some drops where left in the glass and as my work in lab taught me is this more then enough to inoculate a new culture. And so I added some honey and water again, and placed the mixture on a warm spot. 30 minutes later the mixture was happily bubbling again. In the meantime I mixed the preferment with more water and flour and kept it over night on a warm spot, to. The next morning it was looking very active, doubled in size and smelled and taste a little bit like yeast and a little bit like yoghurt, just like the Lievito Madre! I used it to bake a bread, which worked nicely, too.  So my bread baking experiment with nectar yeast worked at least!

Bread with wild yeast from honey

Mix water with honey and place it in a glass with a loose lid. Place at a warm spot (25°C) for 5 days until it is fermenting strongly.

For Preferment 1: Mix flour and honey water and keep it at a warm spot until it triple in size (about 24 hours).

Now mix all ingredients for preferment 2 and keep it at a warm spot for another 16 hours.

Shape the dough into a loaf, place it in a well floured breadform and proof for 3-4 hours.

One hour prior baking preheat the baking stone to 250°C. Slash the loaf directly before baking.Bake for 35 min at 250°C with steam on a hot stone. 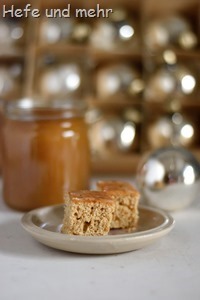 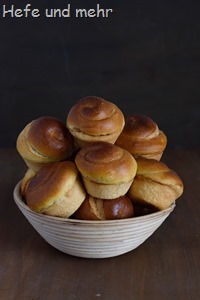 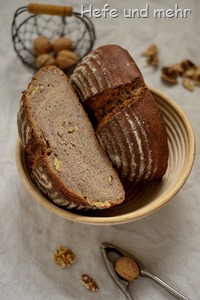