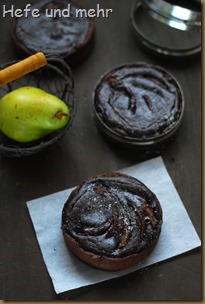 A combination which is unbeatable for me is semisweet chocolate and pear. And when I have pears in the kitchen witch has to be used quickly because they are already very ripe, I tend to always to come back to this combination.

And when I was left with one and half pear after cooking the Apple Pear Jelly I started to knead a pastry dough without much thinking. While the dough rested in the fridge I cooked the pears and whipped up a chocolate filling. The filling is flavoured with a hint of cinnamon and tonka bean which adds some depth to the chocolate.

I baked the tarteletts in rings I bought in France last year, but a regular tarte form will do as well.

Mix Butter with sugar and egg white, then add flour and salt and knead shortly until homogenous. Place in the fridge for 30 min. Now roll thinly and line  tarte forms (Diameter 12 cm).

For Filling 1 peel the pears, cut them in half and core them. Bring cider (or alternativ water and sugar) to boil and cook the pears for 5- 10 min until tender but not mushy. Drain them and let them cool down.