I planned to post about a potato bread today (something I will do later this week) but the result of an experiment I baked this weekend made me so enthusiastic that I could not wait to share the recipe with you!

It is a recipe for a baguette made with sweet starter – a very active but not sour sourdough – and a 24 hours rise in the fridge. The Idea to this baguette came to me when I taste a little bit sweet starter which I kept in the fridge for some days. The complexity of the flavour was fascinating. Despite the time the sourdough spent in the fridge it did not taste tangy or acidic. It has a mild flavour of lactic acid, like you would expect it in crème fraiche.  Beside that I could taste fruity tones and slight alcoholic taste due to the high activity of the yeast. It was a taste I wanted to catch in a bread!

Until now I never tried to bake a baguette with a long cold rise only with sourdough, because I was afraid it would end with a sour and  slack dough due to proteolytic activity of the microorganisms. But with the sweet starter I felt optimistic and so I changed my favourite Baguette recipe accordingly.

After 24 hours I take a airy but still bouncy dough from the fridge, formed the baguettes and baked them. They had a great oven spring and when I pulled them out they started to crackle in the most promising way.

It was really hart to wait until they cooled down enough but then it was pure joy to taste them. Their flavour took me back to france all in a moment! They have a sweet flavour with hints of nuts and caramel, with a slight yoghurt freshness in the background. A perfect baguette, which tastes great eaten plain or with a bit of butter and a pinch of fleur de sel. 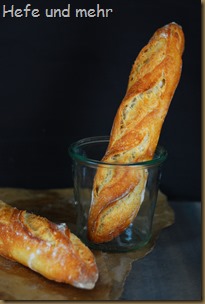 Mix all ingredients for the Sweet starter and let it rise for 3 hours at 30°C.

In the meantime divide into pieces of 200g and preshape into squares. Rest for 20 min.

Then roll  gently into baguettes of 30 cm and proof on a couch for 35 min.